Congratulations to our most recent Employees of the Month –Elizabeth Kuhn, senior personal banker at our Concord Street office, and Dianne Evans, human resources coordinator.

Elizabeth was recognized for her excellent service to customers, flexibility and professionalism. Dianne was selected for her exceptional organization and coordination skills. 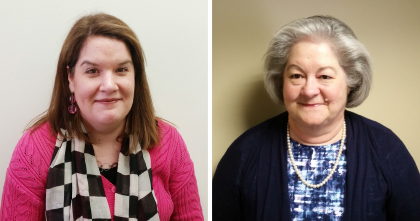 Robert P. Lamprey, chairman of the MutualOne Charitable Foundation, has announced a recent $5,000 Foundation grant to Jewish Family Service (JFS) of Metrowest in support of a program that helps frail elders in Framingham and Natick with their medical needs.

The Patient Navigator/Enhanced Medical Escort Program provides volunteers who facilitate and accompany elders to doctor appointments and medical procedures. Navigators also provide a summary of each appointment for family caregivers, and facilitate access to other needed resources and services.

According to Lino Covarrubias, JFS chief of operations, to date the program has enrolled 336 frail elders and provided enhanced medical escort services for more than 1,050 appointments.

“This is a valuable service for the older adults of our community,” said Lamprey. “The MutualOne Charitable Foundation is pleased to contribute to its continued success in meeting the medical needs of our seniors.”

Gregory Kennedy of Goffstown, NH has joined MutualOne Bank as vice president, retail banking. He brings with him over 16 years of industry experience, most recently with Northway Bank of Berlin, NH where he was vice president/regional market manager.

Kennedy holds a bachelor’s degree in Business Management from LeMoyne College and a master’s degree from the University of Phoenix Online. He is a member of the Salvation Army Advisory Board in Manchester, NH and teaches financial literacy at many non-profit organizations.

The MutualOne Charitable Foundation has awarded $3,000 to Natick’s Morse Institute Library to increase the number of educational technology tools available to local youth, according to Foundation Chairman Robert P. Lamprey.

The Library hopes to grow its collection of technology-based materials for children, including educational tablets and audiobooks, in order to expand its offerings to a larger youth audience, particularly those youngsters with limited access to such resources.

“MutualOne is pleased to help the library enhance its technology offerings so that all children, regardless of their means, can have access to this vital learning experience,” said Lamprey.

According to Greg Tutuny, executive director, NSC’s initiative is designed to improve the health status of elders through individual chronic disease management plans that include increased access to nutritious food and literacy programs.

“MutualOne is pleased to support the Natick Service Council’s efforts to improve the overall health of the elder residents they serve through this program,” said Sousa.

The Board of Directors of MutualOne Bank has elected three employees to new officer positions, according to an announcement today by Mark R. Haranas, president and CEO.

Sambuchi
Kimberly Sambuchi, who previously served as vice president of operations, is now responsible for all information management. She joined the Bank in 2002 and has held positions with increasing responsibility in the retail and client service areas.

Canal
Carmela Canal, who previously served as branch administrator, will oversee operations and data processing. She has been with MutualOne Bank since 1988 and has served in a variety of retail management roles during her career.

Cohen
Kimberly Cohen, who joined the Bank in 2014, will coordinate internal Bank controls and provide support for other departments within the Bank.

A graduate of Natick High School, Cohen has a bachelor’s degree in accounting from Assumption College and a master’s degree in business from Framingham State University. She is a Certified Public Accountant with previous experience at Middlesex Savings Bank and Gerald T. Reilly & Co.